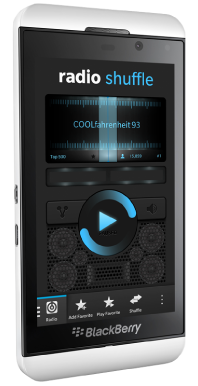 We’ve released a new update for our Radio Shuffle application for BlackBerry® 10 Smartphone. We’ve improved the performance of the application, added a splash screen and fixed reported bugs. We also added auto-play functionality on shuffle and added radio pre-buffering for instant radio playback. Last but not least we added a data usage tracker, which can be switched off if performance issues arise! Complete with a beautiful user interface, Radio Shuffle is the ideal application for any music enthusiast out there. Whether you’re into classical music, hard rock or dance, with Radio Shuffle you’ll have your favorite station on anytime, anywhere!

Compatibility
Radio Shuffle is compatible with all BlackBerry® 10 Smartphones