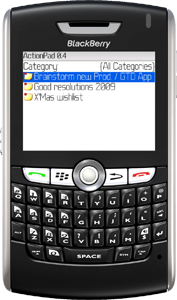 We have just started an open beta test for the new productivity application ActionPad(TM) for BlackBerry®. ActionPad’s design was inspired by the simplicity approach which made NextAction! and TaskMaster(TM) so popular amongst thousands of BlackBerry® users.

This beta test is totally free of charge and open to everyone. Please feel free to tell this anyone you know if you think they could make use of ActionPad(TM). We would like to get as much feedback as possible!