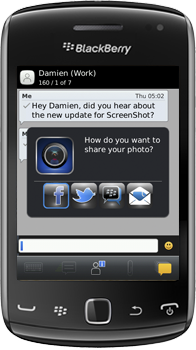 We’ve released a free update for Screen Shot Free and Pro. Screen Shot is an app that allows you to take a screen caption of whatever is visible on your BlackBerry® Smartphone’s screen. With this new update, sharing these screen-shots is faster and easier than ever before. We’ve done this by adding a sharing to Facebook or Twitter functionality. With this new sharing functionality we’ve also updated the UI. Furthermore, we’ve included major bug fixes, making Screen Shot perform even better. All these new and improved features are available in a free update! Get the latest version of Screen Shot on BlackBerry App World™.

Compatibility
Screen Shot is compatible with all BlackBerry® Smartphones running OS 4.5 or higher.