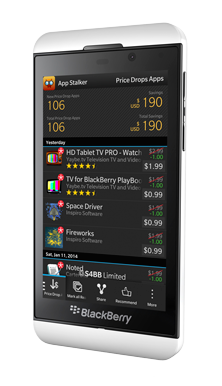 App Stalker is yet another one of our applications to receive the quality assuring Built for BlackBerry designation! Additionally, we also updated the app to a new version. Users can now share their lists of discounted and free apps to their friends and even let them know about specific apps that dropped in price or became free. The update also fixes a variety of bugs, such as an error that made the user interface blink upon marking all apps as read.

App Stalker is the perfect app to find the best deals on BlackBerry World™, allowing to track featured, discounted and newly free apps! Simply tap on a desired app to be redirected to BlackBerry World™ and the download!